The Grange Opens Despite Shutdown Difficulties 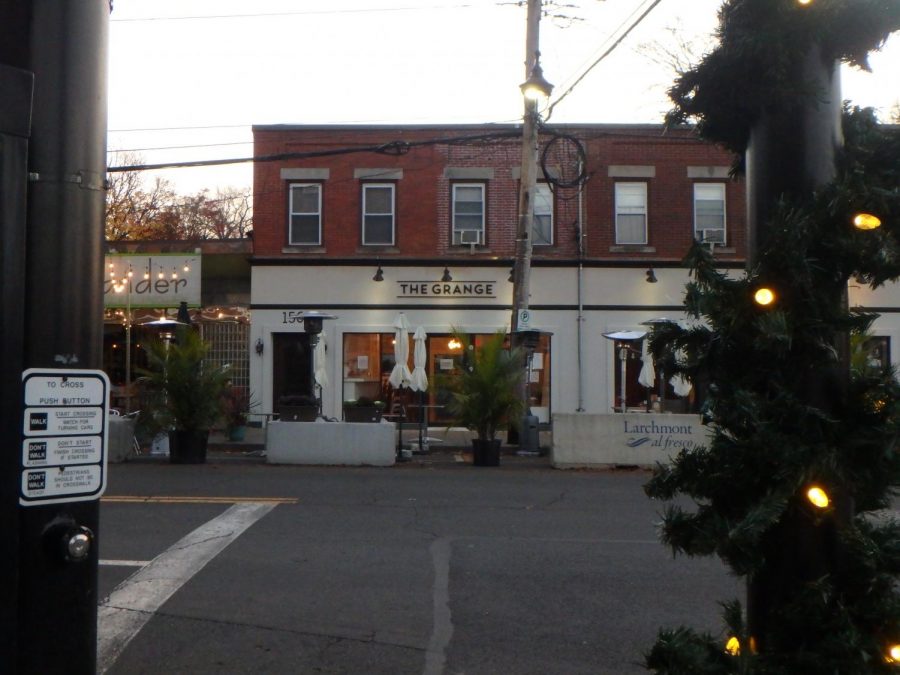 The town of Mamaroneck has taken great strides in producing a safe and welcoming environment for its community during these difficult times. One of the most challenging aspects was finding a way for restaurants to safely open back up. The Grange, a small cafe, has not only opened up and spurred a lot of positive feedback in our community, but has managed to do it in a way that follows the safety precautions of the pandemic.

As defined in the “About Us”section of their website, “grange”is defined as a gathering place that is centered around food. Although the pandemic has put their hub for group gathering on hold, the restaurant bounced back immediately and found a safe way for people to enjoy their space. Owners Lisa Chase, Lisa Moskow, and Lisa Samson worked incredibly hard to ensure The Grange would open safely and welcome all people who were in need of something great to eat. They are currently “al fresco,” but welcome people to sit outside or take their food to go.

The idea for The Grange first came when a sandwich shop in Larchmont closed down a few years ago. Upon hearing of the closure, Lisa Chase reached out to her friend Lisa Moskow and told her to open up a new sandwich shop that would provide quick service and good food. Moskow agreed, but wanted to work as a team to create a place for people to enjoy. So, in October of 2018, the long road to success began. Although their original space fell through, they found their current space and began working with Lisa Samson to design and create the restaurant. All three women had a connection to the food industry, and felt inspired to open a space for people to share. The women allied and became the three Lisas, creating the team we now know today.

Once the owners were able to get past some initial structural and gas issues, they were ready to and excited to open. However, the pandemic hit in full force, forcing them to delay the opening. Chase explained how they all took a step back to breathe and to decide whether to call it quits or work to find a way to open safely with time. The women were inexperienced restaurant owners
and were distraught over whether or not they could still go through with their plans. Chase explained how they felt as though they had come too far to quit, and did not want to give up after all of their hard work. The three of them had fought through so many obstacles; from losing their first space to struggling with parts of the renovation, they were determined that the pandemic would not end their journey. Chase explained how the opening of a new restaurant shone a light through the community, because with so many “for sale” or “closing” signs, people were optimistic about a new space. Chase shared that she recently read a statistic showing that close to 80 percent of locally-owned restaurants could close because of the pandemic.

The three women worked incredibly hard in order to create a safe environment for people to enjoy. Larchmont Mayor Lorraine Walsh helped them to find outdoor seating and was incredibly supportive. They knew the winter was coming soon, and wanted to open while people would still be willing to sit outside. On September 15, The Grange opened and the community was incredibly excited.

Having finally opened to the public, the owners’ new task was continuing to maintain a safe environment and limit exposure to people. They have plenty of sanitizer and masks available for the public and have disinfectant services come in frequently to clean everything. The restaurant also has an air filtration system to help keep the space clean. As for the turning weather, they’ve purchased heaters and are working to create an online ordering system to increase more take-out opportunities. The average time for someone to order and pick up their sandwich is between five and seven minutes to limit exposure while lingering during this time.

While they did not have publicists, word spread quickly about the wonderful new space and people were eager to support it. All three owners had been very involved in the community, each living here close to twenty years, so their friends all aided with the opening. Just recently, the restaurant has joined social media, posting photos of the food and space. Overall, the publicity has been very natural and not forced. Chase joked that people love to hear stories and support “The Three Lisas.”

A restaurant offering quick, Manhattan inspired foods like sandwiches, breakfasts, and drinks was a huge hit. The food is sophisticated, globally influenced, delicious and nothing like the Village has seen before. Members of the community are constantly raving about the food, complementing the cooking and congratulating the owners of their success. Chase shared that members of the fire department claim that “The Cubanish” is the best sandwich they’ve ever had! She also shared that they are incredibly thankful for the support the community has shown and for people understanding how difficult opening has been. One of her most memorable moments has been “sharing bubble tea with everyone… kids are loving it” and she says it has been one of their largest sales! Chase claimed that “It’s like a party in your mouth! It is delicious, fun, and different!” The road to opening had been full of many bumps, but Lisa Chase, Lisa Moskow, and Lisa Samson have shown how dedicated and positive they are to keep the restaurant open and safe.