The 2021 Senior PACE Show in Review 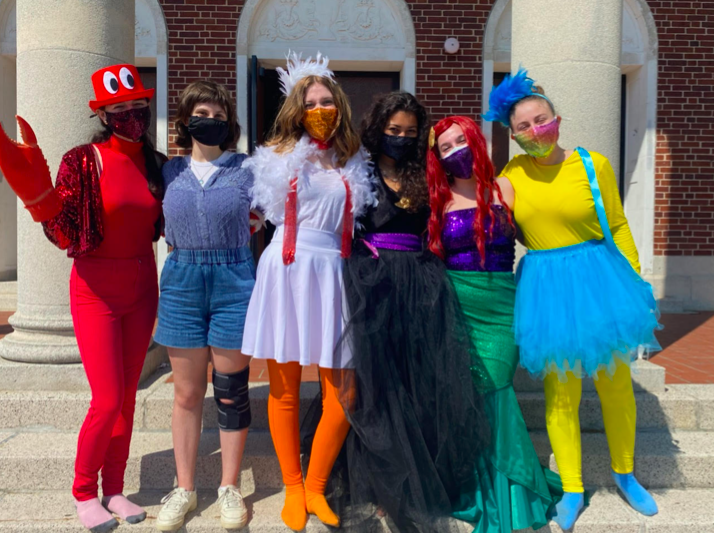 For many at Mamaroneck High School, the end of senior year is a time for conclusionary projects. It is a period in which students with a multitude of different interests work to summarize their learning or make one final statement through presentations, internships, programs, and more. Hence, within our performing arts program, twelfth grade students prepare each year to put together an annual Senior Show.

Aspiring actors and directors working in the PACE program for four years created a series of six individual pieces, all featuring different students playing unique roles. The first of these pieces, Letters to Caroline, was directed by Ava Delaney, featuring Ashe, a seemingly isolated character writing to a beloved friend during a hard period in life. This short performance was later contrasted as actors moved off stage and into Zoom; Breakout Rooms by Sarah Anna Jonas and Dimitrios Repoulis shined a light on virtual school conflicts and teacher-student relationships continued over technology. While this part of the show demonstrated a more comical aspect of COVID-19, Seasoned Fatigue written by Arden McHugh displayed some of the darker effects of the pandemic as one student reminisced over times with her friends. Scaredy Cat created by Mackenzie Minguillo focused on friendships and young relations as well when leading character Timmy frightened his friends with a story after being teased for his own fears. Courtney Ross’s Last Night’s Dream brought romance into the production as two protagonists grappled with feelings they’d had for each other over the years. Lastly, You’ve Got To Be Kitten Me! A Tail Of Cats: The Musical by Luisa Nahr portrayed the escalation of a debate between two friends over musicals they appreciated. It seemed, in the end, that each skit in Senior New Plays had a meaningful lesson to it, offering insight into life now.

In Dance, students collaborated to create eleven different pieces, almost all of them examples of original choreography. Dance night began with The World We Had by Izzy Halperin and Vanessa Parra, a dramatic and beautiful introduction. It was soon followed with the colorful and lively debut of It’s Not Unusual, choreographed by Jenny Anthony, Caitlin Ausili, and Molly Kiernan. Waving Through A Window, a tap dancing solo to a Dear Evan Hansen classic song by Trudy Marszalek added to the diversity in pieces throughout while Supercut created by Sela Breen, Jenna Feldman, Calle Harwin, Maya Kennedy, and Kate Solomon displayed an impressive use of synchronization. Daydreams made by Olivia Gargiulo and Amanda Mann included a fantastic amount of interaction between dances and illusory imagery. Both Babooshka choreographed by Delaney, McHugh, Jess Kaplan, and Jordan Reilly in addition to Wuthering Heights created by Courtney Ross seemed to have an eerie and electric feeling to them. Meanwhile, End Credits produced by Reilly and Luisa Nahr was highly rhythm-oriented with a modern feel. Ready For It by Grace Dillon, Kiely Fleming, Mikayla Keane, and Claire Whitaker had similar rhythmic focuses while The Feeling choreographed by Luisa Nahr was one of those dances that could make anyone happy. The dance night concluded with Parson’s Etude, a popular piece choreographed by David Parsons with a lot of coordination and staccato music. Each number seemed to bring something different to the performance as a whole.

The music students of PACE 4 have done an incredible job with resources this year, especially as they lack a formal classroom. Thus, it is incredibly unique to see their collective works come together.

Music Night opened up with Sweet Creature performed by Halle Hart, a Harry Styles song with incredible vocals. Molly by Kayla Yan was a unique piece with an indie rock feel, and I’ve Got A Feeling I’m Falling by Andrew Sacks brought jazz into the production with his phenomenal piano skills. The Lana Del Rey classic Mariners Apartment Complex was reinvented by Dillon, Keane, Casey Gomes, and Amy Liverzani in a fun music video which featured the students around town. Meanwhile, Desconocidos by Denis Castro Mancia incorporated Spanish lyrics, ukulele and guitar into Music Night with Mr. Derby’s help.

Solo vocal performances such as If I Could Tell Her by Caitlin McCauley, a Dear Evan Hansen classic, and Karteshistan by Zack Breault, a creative rendering of the nation’s national anthem, really contributed to the performance. La Valse D’Amélie Poulain, played by Josephina Kaminski, added a gracious touch of classical music just before the entire class participated in Queen favorite Somebody To Love. During the music video for this finale, we are able to see footage of the PACE 4 Music class’s experience during COVID-19.

It is heartwarming to see how important this show has been to many seniors, especially as a lot of them go on to pursue performing arts or participate in it during college. This group of people has accomplished incredible things and MHS can’t wait to see what they do in the entertainment industry into the future.