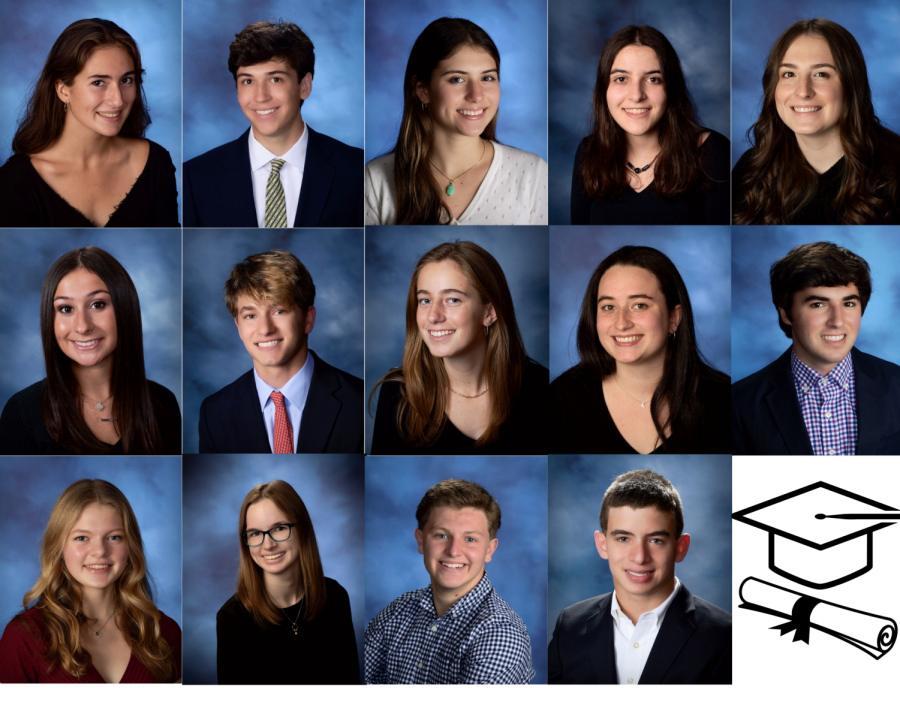 Henry Bova joined the Globe his senior year as the Arts and Leisure Page Director. Bova shared that he enjoyed the meeting for the April Fools day issue and bouncing ideas off of each other to create a fun and different issue. His favorite aspect of writing for the Globe was trying to work at an angle that relates to MHS, even if the topics were not entirely school-related, serving as a great creative challenge. Bova’s advice for future staff is to always get ahead on writing articles, to avoid stressful nights writing articles up the day before they’re due. In the fall, Bova will be attending Northeastern University where he plans on majoring in English and journalism.

Chris Ciulla has been an integral part of the opinion section of the Globe for the past three years. He started out as an Assistant Page Editor for the OpEd section his sophomore year, before moving to the OpEd Page Director and finally Editorial Director in his junior and senior years, respectively. Ciulla says that his favorite part of his time on staff was, naturally, the “lively Globe room debates about hot-button issues.” Next year, Ciulla will attend Cornell University where he hopes to continue his student journalism.

Sydney Girvin has been a member of the Globe since her freshman year. In her time on staff, Sydney has served as Spotlight Editor, Op-Ed Page Editor, and most recently, Editorial Managing Editor. Girvin’s favorite part about being on the Globe staff were the lively and exciting Editorial Meetings as they brought the staff together to discuss important topics. In the fall, Girvin will be attending Duke University to study public policy and plans to explore journalism and media studies as well.

Maia Glazer joined the Globe staff her junior year as an Assistant Health & Wellness Page Editor and co-led the H&W section her senior year as H&W Page Director. Her favorite memory from being on the Globe staff was eating snacks in the Globe room (before COVID-19) with the staff as they worked on editing and formatting. When she was not writing or editing articles for the Globe, Glazer was involved with the volleyball team her freshman through junior year and was an active member of the computer science club. She will be attending Duke University in the fall and is currently undecided on what she will major in. Glazer advises future Globe staff to “write about what you’re interested in [because] it’s such a great way to find a passion!”

Vincent Jacobé de Naurois has held a position on the Globe for the past two years as a Business Liaison. Starting in the fall, he will be attending Bocconi University in Mila, Italy, and will be studying economics. While Vincent is ecstatic about the new opportunities and experiences in a foreign country, he will greatly miss his home and his time at MHS. He will especially miss working at the Globe as he greatly values the time spent here. One of Vincent’s favorite parts of being on staff was working in Spotlight and coming up with creative ways to highlight the wonderful student body at MHS. Vincent is thankful he was able to be a part of the amazing production of the Globe.

Brandi Ritter joined the Globe during her sophomore year. Her first position on staff was Assistant Editor for the Features section, and in her junior year, she was a Health & Wellness Page Director. For her last year on the Globe, Brandi was the Managing Editor for Health & Wellness, Sports, and Arts & Leisure. Her favorite part of being on staff was staying after school for editing and formatting and spending time with the other members. Ritter is going to miss being a part of a fun group and seeing the paper come together with each issue. Her parting advice for future staff members is to always write about what you’re interested in and to make sure you get to know your fellow staff members! After graduation, Ritter will be studying psychology at Binghamton University.

Kate Solomon started writing for the Globe her freshman year. Since officially joining staff her sophomore year, she has worked as the Assistant Health & Wellness Director, the Features Director, and the Spotlight and Features Managing Editor. Solomon recalls the Features section being her favorite section to write for, but her favorite thing about the Globe as a whole was the “community within it.” She started writing for the Globe not only because she loved writing, but also because it led to many friendships and supported her creativity. Solomon advises future members to look at the positive side in every situation and to try new things. She reminds us that in the end it doesn’t matter if you don’t get the article or position you want; it’s about having fun and discovering new passions.  Next year Kate will be majoring in sociology at the University of Pennsylvania.

Jamie Soropoulos became a member of the Globe staff her senior year and served as the Op-Ed Page Director. Her favorite part about being on staff was being able to see her articles published in the paper. “Nothing beats the feeling of opening an issue and finding your name in the byline,” says Soropoulous. When asked for her advice to future Globe staff, Soropoulos shared, “I would simply tell them to write! Find something that interests you and run with it.” In the fall, Soropoulos will be attending Syracuse University in the Newhouse School of Public Communications, where she will be majoring in magazine, news, and digital journalism.

Sydney Susswein has been writing for the Globe since her freshman year but began to work as an official member her sophomore year. Throughout that time she held the positions of Assistant News Editor, Editorial Director, and Sports Page Director. Susswein suggests that future members of the Globe should work in a section that they care about because it will end up being a much more interesting experience when researching and doing interviews for the article. She also really enjoyed the friendships she made while on staff. In the fall, Susswein will be attending Georgetown University and plans on studying business administration.

Lulu Tantillo joined the Globe staff her senior year, serving as an Arts & Leisure Page Editor and a Multimedia Director. Her favorite part about being on the Globe was her ability to pursue her interests in writing and video–she also found being surrounded by other strong writers was “really great and motivating.” Tantillo’s biggest takeaway from writing for a school newspaper was getting the opportunity to “interact with the community you’re in.” She advises future staff members to “use the Globe as a way to become more involved with the school” and “gain more perspective” by listening and learning from others you wouldn’t normally engage with within the MHS community. In addition to serving on the Globe staff, Tantillo was involved with multiple MHS orchestras and jazz bands and did a lot of freelance video work for the school. In the fall, Tantillo will be attending New York University’s Tisch School of the Arts, majoring in film and TV.

Abby Tucker has really enjoyed her experience on the Globe, serving as the News Page Assistant Director and Copy Editor her junior year and the News Page Director her senior year. “I loved reporting news and trying to determine which issues would interest students,” she explained when asked what she liked about the Globe. “I also loved writing articles for the April Fools issues.” She has written beautifully honest pieces about MHS, and events occurring in the background of our adolescence. Outside of the Globe, Tucker was very involved in the music department and the varsity softball team. Tucker advises future staff to “write about topics you’re interested in because it makes the articles more interesting.” In the fall, Tucker will attend Georgetown in Washington D.C. where she will major in political science with a minor in music.

Spencer Wolff has written for the Globe since his freshman year. In his early experience on staff, he found he had a knack for writing sports articles, leading him to take on the position of Assistant Editor of the Sports Page in his sophomore year. He then went on to become Co-Editor of the Sports Page his junior year. As a senior, he decided to switch his focus on the Globe and served as the Co-Editor of the News section. Wolff said that his favorite part of being on staff was the feeling of being part of a community where “each staff member had the backs of every other member.” The biggest piece of advice he had for new staff members and anyone who decides to write for the Globe in the future was to always “tell the truth in your reporting.” Wolff is excited to be attending Davidson College in the fall.

Simon Worth has been a member of the Globe staff since freshman year. In his time on staff, he served as Assistant Op-Ed Director, Assistant Sports Editor, and Sports Page Director. His favorite part about being on the Globe staff were the writing meetings, which he said had “very insightful conversations.” His parting advice for any future staff members and writers is to be proactive about putting in work with editing and formatting, even if you are not writing. Worth will be attending Boston College in the school of Arts and Sciences in the fall where he will be majoring in history.