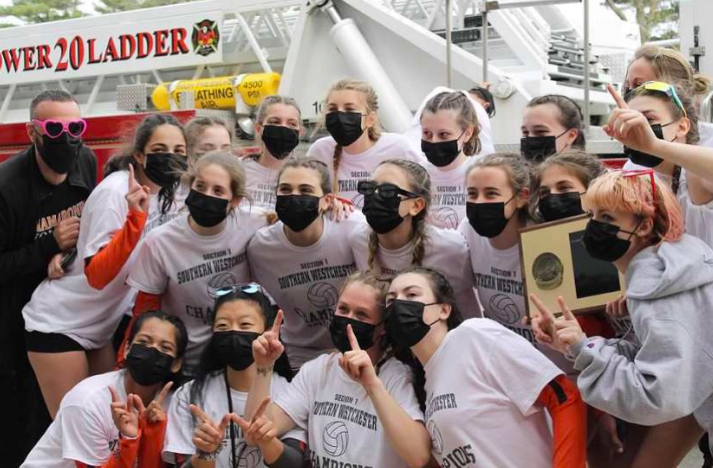 The Girls Volleyball team poses for a photo after winning Southern Westchester Sectionals.

This spring, the Mamaroneck Varsity Volleyball team won the Southern Westchester large schools crown, winning their first postseason title in 40 years. After the season was postponed in the fall, many members of the team questioned if they would even have a season by the end of the school year, or if they did, what it would look like. Despite this, the Mamaroneck varsity girls walked out of the season with a championship title.

Coming into the season, there was a large group of upperclassmen, including seniors Emilia Pantigoso, Elissa Berger, Brynn Bizzard, Kaitlyn Chun, Grace Murphy, Ella McLoughlin, Ashley Robalino, and Kayla Cruz who all began the spring  “focused and prepared to play,” according to Coach of the Year Stacy Riter. Riter also said that those seniors came to the team with excellent leadership and welcoming arms to the several underclassmen on the team. This helped for everyone to be very comfortable with one another. Coach Riter states that she’s “never had a team with such a special connection and chemistry.”

Although the season was shortened, this did not stop the Tigers from greatness, where they ended the season with a 15-2 record, heading directly into the playoffs. At the start of the postseason, they faced Sleepy Hollow, sweeping them in 3 sets and sending themselves off to the semifinals against Eastchester. In the semifinals, they beat Eastchester in 5 sets, moving on to the finals, in which they won the title of Southern Westchester large school champs. This is due to the fact that their “biggest strengths were grit and determination,” according to Riter. Without the girls’ hard work, they would never have come this far.

Although it has been some time since the finals, the volleyball team has still gotten unconditional support from parents, former players, and many other fans in our community. Along with this, Riter says, “It’s been a lot of years of hard work to get back to being a top program and I couldn’t be happier that this group in particular won a title.” This especially stands true, since this team worked through the hardships of the COVID-19 protocols and the postponing of their initial season in the fall.

All in all, despite the team’s minor setbacks due to the pandemic-like limited fans, shorter season, and playing with masks, they were able to strive above all other teams in the league. Volleyball came home with a championship title for the first time in 40 years.