The BLM Movement and Social Studies Classes at MHS 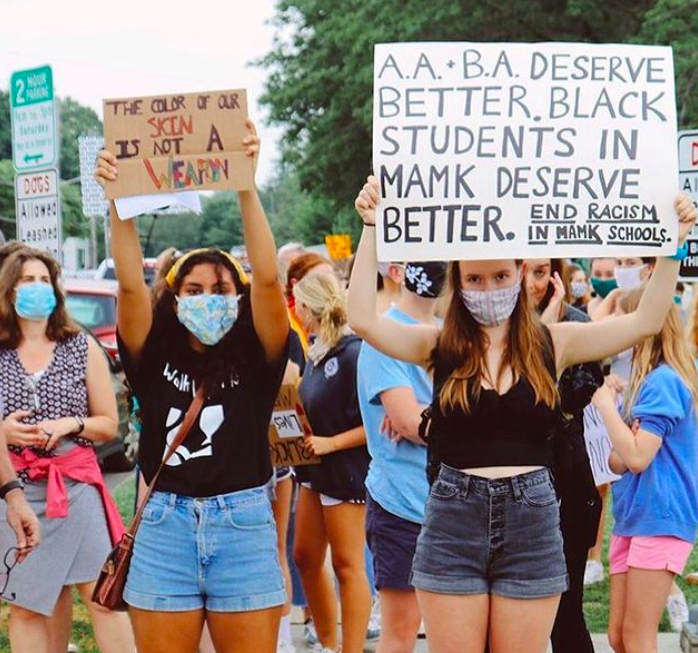 MHS students taking part in the BLM protest in Mamaroneck in June 2020.

Last summer, on June 5, 2020, people lined the streets of Mamaroneck waving signs declaring a need for racial justice. People from the Larchmont-Mamaroneck area, many of them Mamaroneck High School students, marched by Harbor Island Park, participating in peaceful protests spreading across the country.

With the rise of public visibility of cases of police brutality targeting Black Americans in 2020, with body cam footage being released to the public, bringing the victims into the public eye, the Black Lives Matter movement was brought back into the spotlight of the media after some time. With the Black Lives Matter movement having such an impact on Black Americans, and more attention being brought to changes in the police that need to be made in America, the movement is as important right now as ever.

With so many MHS students attending Mamaroneck’s Black Lives Matter protest held last June, the impact the movement has on Mamaroneck students is clear. Despite this, the BLM movement doesn’t have as much of an impact in our current school curriculum as it should.

The BLM movement is by no means a new development. The Black Lives Matter Network was officially founded in 2013 by Patrisse Cullors, Opal Tometi, and Alicia Garza to raise awareness about systemic racism in America and advocate for racial justice. However, since many decades before, Americans have been fighting together against the violence Black Americans face, specifically, police brutality.

Many of the recent protests were sparked by the death of George Floyd who was murdered by police officer Derek Chauvin on May 25th, 2020. The media coverage of his case spread quickly and it didn’t take long before people demanded justice both for him and for the other hundreds of Black people that face racially motivated violence from police officers on a daily basis. George Floyd’s killer, Derek Chauvin, was finally convicted for Floyd’s murder in late April 2021, almost a year later. However, so many victims of police brutality still go without justice and without the conviction of their killers. The BLM movement is still just as important now as it was a year ago, even if the organized protests are harder to come by now than they were in the summer of 2020.

After asking students at MHS for their thoughts on the movement, it seems to be a common opinion that the Black Lives Matter movement should have a larger impact on the current curriculum than it already does.

Erin Jahn (‘23), explains, “The Black Lives Matter movement isn’t very new, but it’s so current that it’s important to give it more of a focus in class. A lot of us already do our own research on it, but learning about it from a school setting is important in bringing even more awareness to it as a current issue.”

The idea that the BLM movement deserves more weight in the current school curriculum isn’t new or uncommon. Many MHS students already care strongly about current issues impacting our world. However, this also goes for past issues. The Facing History and Ourselves unit is a newer addition to MHS’s freshman curriculum. Throughout it, the school allows for students to focus on the history of the fight against systemic racism. In recent years, the facing history unit has served as a way to look closer at events and time periods in human history, and reflect on them so they don’t go forgotten, and people can learn to do better.

The course covers issues of the past, reflecting on the Jim Crow era and segregation, and learning about other areas in history where Black people in America were treated unjustly. However, as it is, MHS students don’t get to focus enough on the current aspects of the Black Lives Matter movement, or its impact on our world in a school setting. The BLM movement directly impacts people, including the people here. It’s been almost a year since Mamaroneck’s Harbor Island Park protest, and changes are already being made in the world. In New York, we saw a shift in funding for the NYPD be moved towards other youth and social services, and we’ve seen police officers responsible for violence towards Black Americans face due punishment. With its impact on the world, and with so many people fighting against the racism we see in America, it should be important for the Black Lives Matter movement to be made more central in MHS’s history classes.