With the creation of the District Equity Team, the MUFSD works to achieve equity within its six schools. 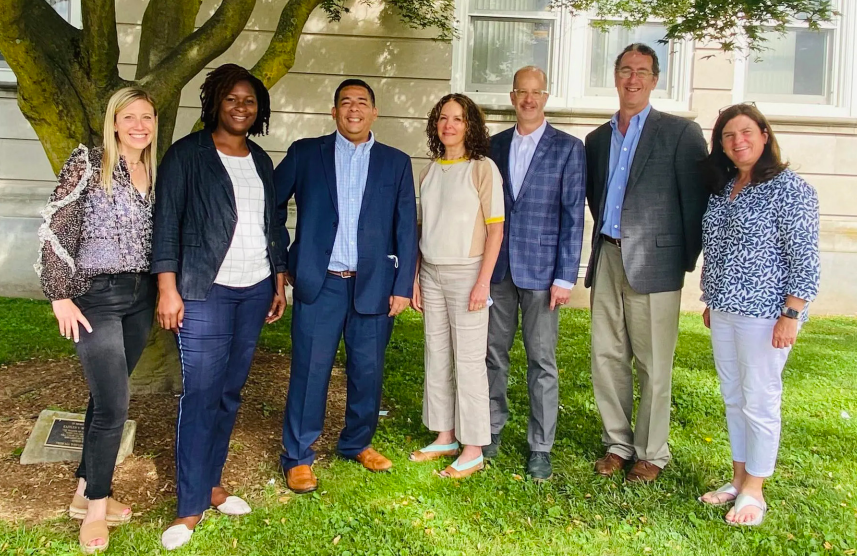 In response to the murder of George Floyd, an unarmed Black American, on May 25th, 2020, the United States of America and its internal societal structures entered into a period of reflection, acknowledgment, and action to fight existing systemic racism that has long infected the roots of American society.

The Mamaroneck Union Free School District (MUFSD) has responded to NYS’ recent legislative mandates by forming the District Equity Team (DET), a group of teachers, administration, parents, and community members who have been tasked with developing and implementing the District’s Equity Plan (DEP) and its related equity initiatives.

The DET dates back to the spring of 2019, when the district engaged in professional development, following the four Principles of the New York State Education Department’s Culturally Responsive-Sustaining Education (CR-SE) framework. In the months following, the MUFSD’s Program Alignment Team for Hispanic Students (PATHS) committee met to redefine their goals and form the DET, at the direction of Superintendent Dr. Robert Shaps, bringing in an additional advisory committee. The advisory committee, the group tasked with developing the District Equity Plan, was co-chaired by Shaps, and included various teachers and staff members from throughout the district. In October of 2020, after a community presentation detailing the district’s new equity plan, the DET began accepting applications from parents and community organizations, and included  student representation by inviting MHS’s Multicultural Student Union (MSU) to participate in DET meetings.

One of the DET’s many members is Leon Whyte, the Hommocks Middle School Choral Director, who leads the DET along with Jenny Rodriguez, Assistant Principal at Mamaroneck High School. Whyte, who joined the DET at its founding and who will become the MUFSD District Equity Coordinator in 2021, said he wanted to make an impact in diversity and equity past just his choral classroom by, “working alongside a team to make a difference in the wider community.”

According to Whyte, over 50 interested candidates submitted applications to be on the team. He said that whether or not they were offered a seat depended on “their previous or current involvement in DEI (Diversity, Equity, and Inclusivity) work, the possible contributions they could make to the DET,  and statements describing ‘WHY’ they wanted to make a difference.” The full list of advisory committee and DET members, excluding parents, community organizations, and other community members, can be found on mamkschools.org.

So far, the DET has made several advancements following their three priority areas originally outlined in their first community meeting and has achieved many of the goals outlined within. These include a curriculum audit currently underway, the hiring of a District Equity Coordinator (Whyte), and Mamaroneck Equity in Education Leaders (MEELs) for each district school, all of which will be accounted for in the 2021-2022 budget. Other goals include initiating an external equity audit to assess the various needs throughout the district as it pertains to DEI work, and to help the DET focus its resources on these select needs. According to Whyte, an auditor has been selected by the Board of Education. In addition, continuing student advisory programs in an effort to “foster an affirming school environment” as well as updating the code of conduct to focus on “restorative practices that are more equitable” are important short-term goals for the DET, according to Shaps.

In June and July of 2020, over 50 current and previous MUFSD students submitted testimonials to the Instagram account @sheddinglightmamk, detailing incidents of alleged racial bullying in the MUFSD. When asked directly about how the DEP plans to address these incidents, Whyte commented, “the District Code of Conduct is being reviewed to clearly reflect zero-tolerance for racial bullying and harassment. Hommocks MEELs and administrators, for example, are revising the school’s student handbook to clearly outline measures that will be taken should such incidents occur. It is also important to note that during the middle school’s first faculty meeting, teachers were engaged in an in-depth DASA (Dignity for All Students Act) presentation that urged teachers to focus on the welfare of [all students protected by the law].” DASA training is critical to maintaining students rights, specifically at Hommocks Middle School, which was cited by the New York State Comptroller for under-reporting DASA incidents over the 5 year period between 2012-2017.

Whyte also referenced priority area number three, goal number two, of the DEP when asked about @sheddinglightmamk testimonials, which outlines the DET’s intent to “work in collaboration with the Board Policy Committee, community members, and District Equity Team to review and redefine policies based on antiracist mindsets and viewed through an equity lens. (e.g., District Code of Conduct, transportation policy, professional Code of Conduct, school safety code, attendance policy, job postings/recruitment of staff/hiring/interview procedures, new staff mentoring, new teacher orientation, and professional programs.)” Diversity in teaching staff, in theory, should create more comfortable and affirming classroom environments for students of color. When asked about staff recruitment, Dr. Shaps mentioned that the district has “done a lot of work to hire diverse staff,” citing that although the MUFSD administrative team is more diverse than ever, hiring teaching staff is an evolving process.

All in all, the District’s equity initiatives reference intent towards important programs, which, will be implemented into district policy, codes, and programs over the upcoming school years. Students can see evidence of action in Advisory programs, MEELs at each Mamaroneck school, and changes in district-wide and school-specific codes of conduct.