No student at MHS was alive on September 11, 2001. How do they remember that day through stories? 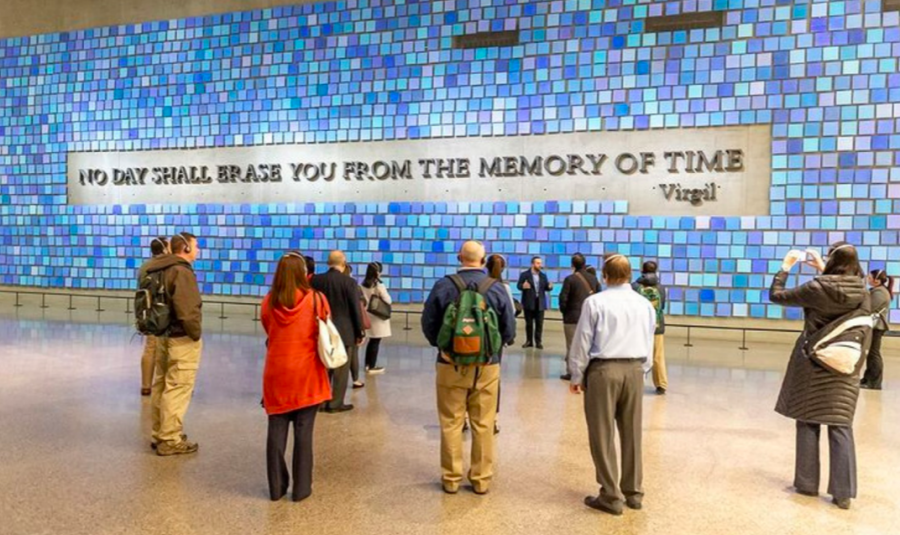 Visitors gather around an art exhibit dedicated to those who died on September 11, 2001.

Twenty years ago, on September 11, 2001, the United States witnessed the most horrific and tragic terrorist attacks in its history. On that day, an estimated 2,977 people died and over 25,000 were injured, while thousands of survivors have since suffered from Post Traumatic Stress Disorder and diseases from the toxic air at Ground Zero, the site of the first two attacks. In the aftermath of the attacks, the phrase “Never Forget” was used to honor the pain of the tragedy, immortalize the sacrifice of many brave Americans, and remember its lasting impact on our nation and the world.
This year, as we reflect on the tragic event two decades later, “Never Forget” has taken on a new meaning. An entire generation of Americans has been born since 9/11 and all current Mamaroneck High School students fall into this unique group. Born from 2003 to 2007, these students have felt 9/11’s lasting impacts and have heard stories from teachers and parents. As such, the question on the mind of many during this difficult anniversary—how can we “Never Forget” if some of us were not alive to be able to remember? How can we explain such a life-changing, paradigm-shifting event to future generations?
Rosemary McManus (‘24) remembers hearing her parents’ personal stories of the day as a child and learning about the attacks in 3rd grade as well. Ann Orans (‘25) and Jordan Davis (‘23) also say that they learned about 9/11 from their parents.
How do these students’ perspectives of 9/11 differ from those who lived through it? McManus explains that “I definitely feel that I can’t fully place myself in the aftermath—what people felt, smelled, heard in that situation. I can empathize with them, but I don’t know myself.” These sensory details are essential in relating to an experience, which is why learning the personal stories, complete with small details, of survivors can help this special generation to better understand what their experience may have been like. Although it is undoubtedly difficult to grasp the entirety of the tragedy with only second hand knowledge, Davis believes that “We’re able to comprehend a moment by listening and actively having open ears and hearts to stories.”
McManus describes the lasting impact of 9/11 on her life as, “I don’t know if it’s 9/11, but I’ve always kind of been scared of airplanes and just feeling trapped so high up. I remember hating going to New York City—seeing all the buildings and wondering if they were going to collapse on me.” Davis explains that, “I think the reason 9/11 touches so deeply for us at this school is that it is so close to home. A lot of my family lives in the city and watched in utter disbelief from their windows.”
When asked what “Never Forget” means to her, as an American with only secondary knowledge of 9/11, Orans reflected that “Never Forget” “means that we will always pass along the stories from that day so that future generations will know what happened so that history can never repeat itself.” McManus echoed this sentiment, saying “Never Forget” symbolizes a need to “learn from these terrible things that happened, and to try to make ourselves better so that we can move forward” and so that those who died “did not die in vain.” Davis believes that future generations should “try to empathize with the difficult experiences and pain that people went through during that period” in order to best understand and honor their experience.
These students also shared meaningful perspectives on how to keep the spirit of “Never Forget” alive for future generations, who will be even farther removed from 9/11. Davis explained that, “As time goes on, events in history seem less tangible and more historical as they are something that didn’t happen in our lifetime,” but that “the shared experience of remembering” will help future generations to understand and reflect on the events of 9/11.
McManus contemplated that “Even if (future generations) don’t have a direct connection to someone who was alive on 9/11/01, it’s really important to share and document survivors’ stories.” By reflecting on the personal stories of those who lived through 9/11, we can better understand and humanize the impact of the attacks. Their stories can help us begin to grasp the monumental toll and legacy of that day.
Orans shared a similar thought; “We’ll keep telling (future generations) about that day every September, and take them to the museum in New York City. They’ll remember 9/11 by the stories they’re told from their parents and grandparents.” One day, the onus will be on our generation to tell the stories of September 11, 2001 and keep the memory of that fateful day alive.