The Gossip on Gossip Girl: Students’ Take on the Reboot

The beloved six-season show is back for a reboot, but emotions among fans are mixed. What do MHS students think? 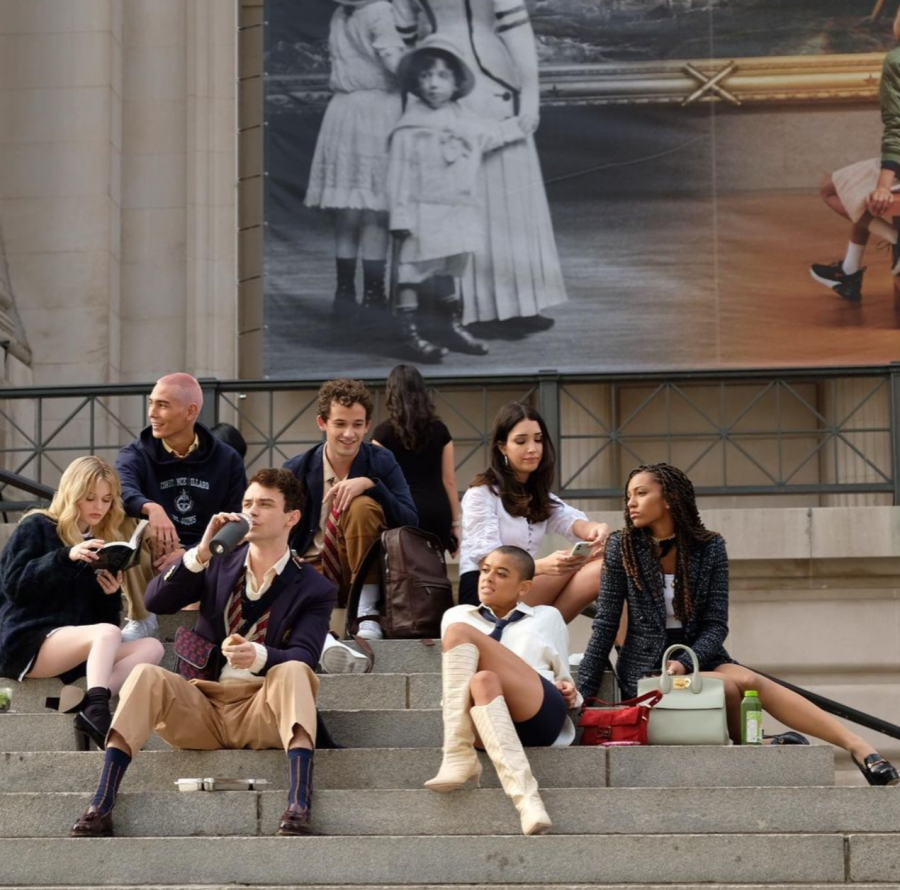 Main characters from the reboot pose in their fashionable outfits on outdoor steps.

The teens of the Upper East Side are back, along with their drama, laughs, cries, and ploys. But is this really the comeback “Gossip Girl” fans have waited for?
The CW’s beloved teen drama television series “Gossip Girl,” which aired from 2007-2012, has been relaunched by HBO’s popular streaming service, HBO Max. Set in Manhattan’s Upper East Side, the show follows the lives of privileged upper-class teens, who are navigating their way through adolescence.
“Glamorous, betrayal, scandalous,” says “Gossip Girl” lover Penelope Markopolous (‘24) when asked for three words on how to describe the idolized show. Markopolous explains that the show’s ambiance is what she believes made it so successful, especially amongst teens. “The lives the characters lived were very glamorous, and I think in a sense that made teens sort of aspire to be like that considering that many teens typically value clothes, fashion, glamor and relationships, and the OG embodied that and more.” She is not wrong. The directors of the original show made it so that viewers didn’t just fall in love with characters, but the clothes they wore, the places they went to, and the overall lifestyles they lived as well.
However, Markopoulos complains that she still hasn’t been able to watch the reboot considering that it is only available to those who have HBO Max. “At first, I was excited to watch the reboot and was curious on how the directors would add their own twist on things, but then I found out it was only on HBO Max, and that was annoying.” Markopoulos is just one of many “Gossip Girl” fans who were left in the dark when the reboot came out because they didn’t have this streaming service.
It’s a no-brainer that the setting, fashion, and characters all make “Gossip Girl” the iconic show known today. While the reboot attempts to take some inspiration from these components of the OG, it has its vibe to it. “Gossip Girl” fan Josie Zevin (‘24) comments, “A lot of people were looking forward to a similar idea as the OG and were surprised when it was more ‘new money’ and influencer-y, which I personally didn’t like.” There’s no denying that social media and this idea of ‘new money’ played a much more significant role in the reboot compared to in the original, showing a societal shift in both technology and values from the 2000’s to today. However, at what point do all these differences make the show not a reboot but a whole new show in itself?
Nevertheless, Zevin remarks, “Even though the reboot wasn’t really my thing, I think it did some cool things in terms of connecting to real-life like making the characters Instagrams.” No doubt, even if the reboot wasn’t what viewers were expecting, it had some cool aspects to it. But whether or not these aspects covered the places viewers felt the show was lacking is questionable. Numerous viewers have complained about the show’s lack of realistic plot twists, unappealing acting, and the fact that the show revealed the identity of “Gossip Girl” right off the bat. Zevin explains that one of the best parts of the original was the fact that the identity of “Gossip Girl” was kept a secret, along with all the scandals and drama, and it seemed like the reboot missed the mark on all those compelling parts.
The reboot had good intentions and the right idea of putting a more modernized twist on an iconic show that is loved by many, but it seems as though the execution simply wasn’t there. From the absence of an intriguing plot to the lack of charm and depth from the characters, the reboot is just missing the mark. However, hope is never lost, especially when it comes to “Gossip Girl,” leaving high hopes for the second season. Nonetheless, in the words of the iconic Kristen Belle, xoxo, “Gossip Girl.”