Must-Watch Movies for the Holiday Break

‘Tis the season for cozying up with the holiday classics! Check out these holiday movies for entertainment over the next few weeks. 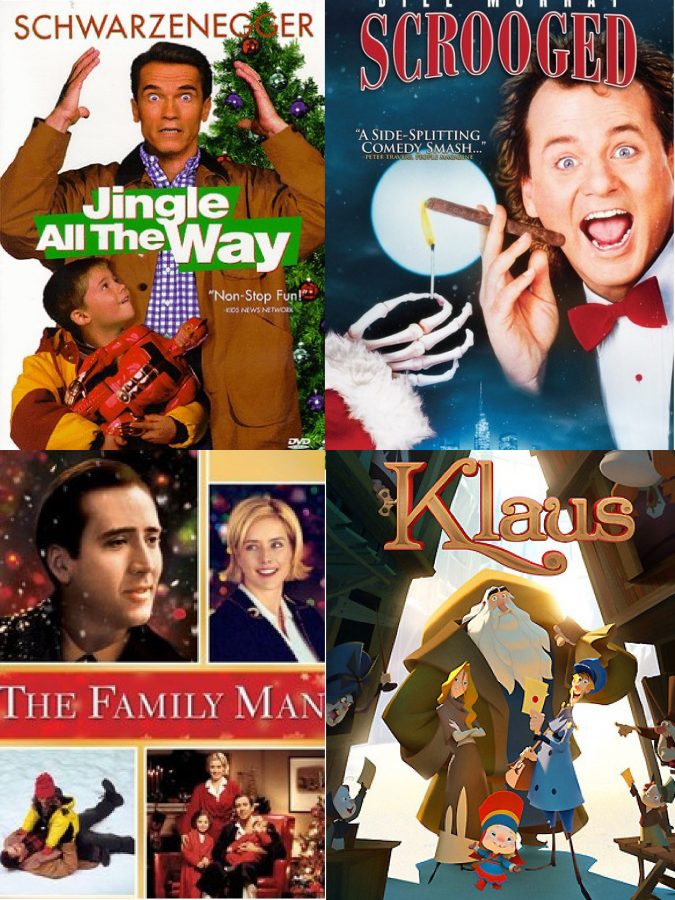 Must-watch movies during the holiday season.

It’s the time of year when we gather on the couch and enjoy a film that encapsulates the holiday spirit. As people begin to cozy up, hot chocolate in hand, they must make a crucial decision: what are they going to watch? Of all the movies in the world, which one is going to get them into the holiday mood?

How the Grinch Stole Christmas (2000)
That Grinch surely is one grouchy guy! Most of us are familiar with the story of the Grinch. On top of snowy Mount Crumpit, all he thinks about is a plot to ruin Christmas for the Whos, the warm-hearted residents of Whoville. In this adaptation, not only will people enjoy a live-action version of the events, but they’ll also get to appreciate the holiday spirit of Whoville, and learn a deeper understanding of the Grinch.

Elf (2003)
Buddy the elf is different from any other one of Santa’s helpers. He knows that as well, since he can’t shake the feeling that he stands out. In hopes of finding his biological father, Buddy travels to New York City. While watching the hilarious moments on screen, notice the themes of love and family as Buddy forges a relationship with his father.

Home Alone (1990)
When Kevin McCallister, a rambunctious and inventive eight year old, is mistakenly abandoned by his extended family, it is his time for him to have the time of his life. This joy is challenged as he now has to defend his home from two burglars looking to raid his house. The story teaches us about an important holiday lesson: the importance of family.

Klaus (2019)
Recommended by Bennett Weinberg
Where is Santa Claus from? This movie provides a theory. Jesper, the worst student at the postman training academy, is forced to go to a distant and gloomy island and deliver thousands of letters to make up for his bad grades. He meets a toymaker on that island named Klaus whom Jesper convinces to help him deliver toys to the children.

Scrooged (1988)
Recommended by Finnegan Atkins
Based on the Charles Dickens story, Scrooged is a modern retelling of the story. Frank Cross is a successful TV executive, but his greed and bad temper drives away the affection of his love, Claire. After firing one of his staff members, he is visited by a series of Christmas ghosts. The ghosts will give him a chance to reflect on and change his past, and think towards the future about what Christmas is all about.

The Family Man (2000)
Recommended by Gabriel Nourdelain
Jack Campbell, a rich wall street executive, lives a Playboy lifestyle of New York luxury. This changes when he passes out from a gunfight, and wakes up in his past life with his college sweetheart, Kate. Now, Jack gets a chance to either live his life with the woman that he loves, or return to his privileged life.

3. Love Actually (2003)
While watching the movie, we are astounded by its realism. There is a variety in the conveyance of love that makes us understand romance during the holiday seasons. In this rom-com about eight couples, people will see the stories of love between a prime minister and a young staffer, a married man who is tempted by his attractive secretary, and six other stories about love.

2. The Nightmare Before Christmas (1993)
Yes, it is a Christmas movie! Jack Skellington is the mayor of Halloween town, but is bored by the celebration of the same holiday every year. While exploring, he finds Christmas town. Jack is unaware of the traditions of Christmas after experimentation, so he decides to make Halloween town run Christmas this year. Little does he know that well-crafted plans can go awry.

1. Jingle All the Way (1996)
Howard Langston is a hard-working father and husband, but he can’t find time to be with his family. To make it up to his son, Jamie, Howard promises to get him the most popular toy of the season, Turbo-Man. He doesn’t have a lot of time: it’s Christmas Eve, and the toy is practically sold out. Worst yet, he has to compete with a mailman who must do a similar task. Will he get the toy in time? Watch to find out!