The Highs and Lows of Varsity Sports

How do MHS Varsity Sports affect the mental well-being of students? 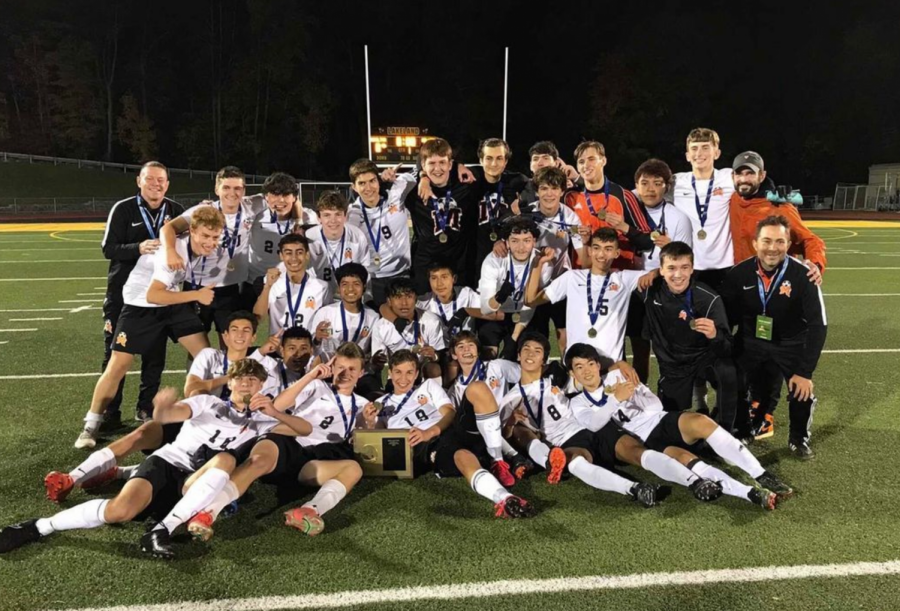 Transitioning into the Winter Sports Season at Mamaroneck, the school has seen some of the greatest Tiger victories in a long time. Girls’ Field Hockey, Boys’ Soccer, Cross Country, and Girl’s Volleyball made it very far into the Post-Season. With spectators allowed back on the bleachers, the student body was again able to follow their success.
Nonetheless, while watching teams compete is a pleasure, life on the field, court, or track is often very complicated. According to psychologist and teen specialist Marshall Mintz, “The professional consensus is that the incidence of anxiety and depression among scholastic athletes has increased over the past 10 to 15 years.” Serious varsity competition can take a huge toll on the average high schoolers’ mental health.
This issue is often most apparent in the constant pressure that competitors place on their own shoulders. In a recent poll, 52 out of 86 Mamaroneck competitors agreed with Mintz’s statement. With college around the corner, many students feel they must succeed to appeal to their colleges of choice. Already, many tigers have been accepted to universities for sports including a few juniors.
Furthermore, the performance of fellow teammates forces certain team members to either keep up with the level of the team or to carry more of the victory. The football team had a particularly rewarding season this year and when asked how he dealt with pressure, quarterback Jason Cox (‘23) responded, “With the team being successful this year, the pressure to do well was definitely higher than usual. As a team, we knew we had something to prove and we used pressure as motivation.” Cox’s answer conveys how some players performed better under pressure. Nonetheless, stress created during this time can have lasting effects on one’s mental wellbeing.
Another debilitating aspect of varsity sports is a toxic team environment. The competitive nature teammates are exposed to can often create unhealthy tension and promote bullying. According to a survey taken during the fall season, 73 out of 97 MHS athletes stated that scholastic athletics have added “extra toxicity” to their lives in the past.
Meanwhile, an anonymous athlete offered an explanation of why these kinds of environments develop: “Oftentimes, varsity teams have numerous players per position, making it so students not only compete against other teams, but also their own teammates in order to get playing time. This typically creates tension between both the players and the coach, because no matter what the situation, someone will be unhappy with the decision.” Coming into tryouts, there is always a range in talent among those trying out, and players are thus frequently pitted against each other, often forming rivalries instead of friendships.
Still, most often, athletes on the same team form strong bonds, helping to keep each other both physically and mentally strong during the season. Out of 113 students who responded to an online questionnaire, 99 agreed that “varsity sports unite us more as a school” while the other 14 stated they “divide us more through competition.”
As long-standing members on one of Mamaroneck’s very tightly knit teams, Cameron Lee (‘22) and Jason Markopolous (‘22) happily summarized the supportive character of the cross country track team. “We’ve got a great group of kids. We’re all super close,” they said.
Varsity athletics can also promote better mental health as many students use practices as a way to destress. In fact, 75 out of 97 Mamaroneck students agreed that joining sports teams can serve as an outlet to release stress. Spending time with friends and playing games remind students that they have time to themselves before beginning homework.
On the bowling team, this idea especially holds true. “Bowling is a place to concentrate on something that I love doing instead of wondering what assignments I have to complete next. The social aspect of the team is also a huge support in relieving academic stress,” Grace Holtzman Hansen (‘22) explained. When they are kept lighthearted, sports can be a great way to break up the day and stay in good shape.
At the high school today, there are so many different sports teams to join. For some, the world of varsity athletics is a chance to prove themselves and rise above the competition. For others, it is a place to form strong bonds and keep active. While it is important to take team commitments seriously, students must prioritize their mental health. Varsity programs can be a gateway to college and serve as outstanding extracurricular activities. However, first and foremost, they are made for students to have fun and just enjoy the game.