Winter Sports Return With Fans in the Stands

After a year of no fans, winter sport athletes are excited to start the new season with cheers in the background. 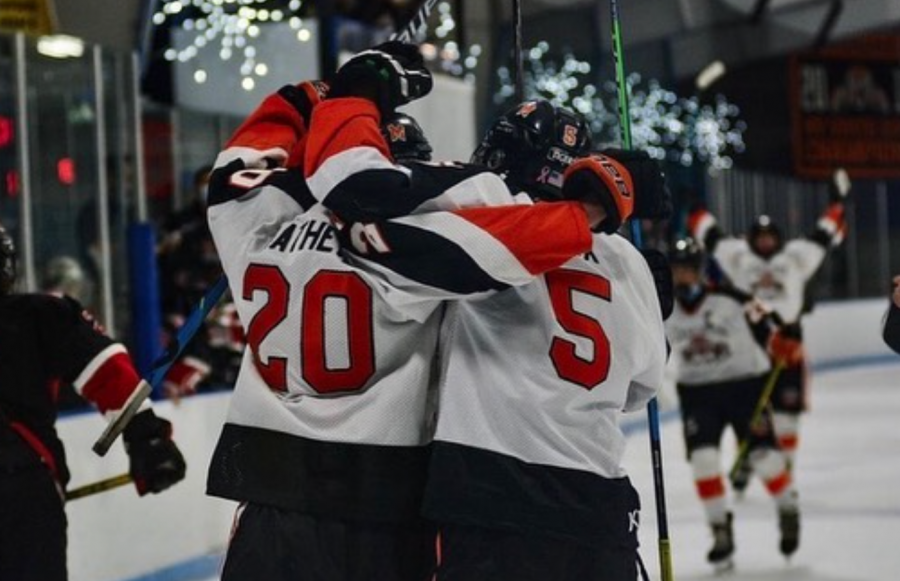 The Varsity Ice Hockey team plays with a crowd through the glass.

Last year, rather than their usual start in mid-November, all winter sports seasons were postponed until February due to COVID-19. This delay not only shortened the season to a few weeks, but it also left the players with no fans allowed in the stands, something Mamaroneck’s winter sports teams had never experienced before. Now, with many people vaccinated, fans of the winter sports teams will be able to attend all games and show their support.
There is no question that having fans or no fans are completely different experiences, both with negatives and positives, but it is clear that having fans is a much more uplifting experience for the players and fans alike. Juliette Ammon (‘22), who has been on the Varsity Girls’ Basketball Team since her junior year, said that she is “happy to have fans [this year] because the cheering brings a better attitude to the game.” Along with Ammon, Coach Chiapparelli of the hockey team says the “boys will love having fan support”. Last season, players were left with no other support system than those on the bench, making it harder to bring the energy to the game. As Ammon explained, with the fans, teams are now able to play in a more energetic atmosphere, which brings their games back to life.
On the other hand, there are many players who often get nervous playing in front of a large group of people or have parents who may cause stress during the games by yelling or coaching from the stands. These types of situations can be difficult for many players, which they will have to adjust to after last season, especially if they found comfort in having nobody watching them. Despite this, having fans can also provide a good outlet for supporters and the student body as well. Chiapparelli explained that “the fans will love the opportunity to support the team and it gives our student body and fun avenue on a Friday night”, which is extremely true, and one way this change has affected supporters along with players.
Ammon took this into account when asked about the change of having fans in the stands, conceding that “I know a lot of people get stressed with fans in the stands because of parents who put a lot of pressure on their kids or getting playing time in front of certain people.” However, she still believes that “ overall it is a good experience to have more people in the bleachers.” It is true that those factors cause issues for many athletes, but it is possible that the energy and positivity of the fans may override some of the stress that players get on the court.
The winter sports teams are getting in gear to play a full length season and are now ready to have people watching their games again. As Chiapparelli said “great for the (hockey) team to know they are scheduled to play a full season”, along with the rest of the winter sports. It is, of course, a completely different environment with and without fans, but many places and teams are excited to have fans in order to keep the game positive and lively. As Ammon said, “It will bring more of an uplifting vibe to the game because people will feel more encouraged.” Fans have the potential to drastically change how winter sports teams will perform this season in comparison to last season. The winter sports teams are very excited about this upcoming season and are determined to succeed.