A local business partners with a community organization to help support Mamaroneck in the wake of Tropical Storm Ida. 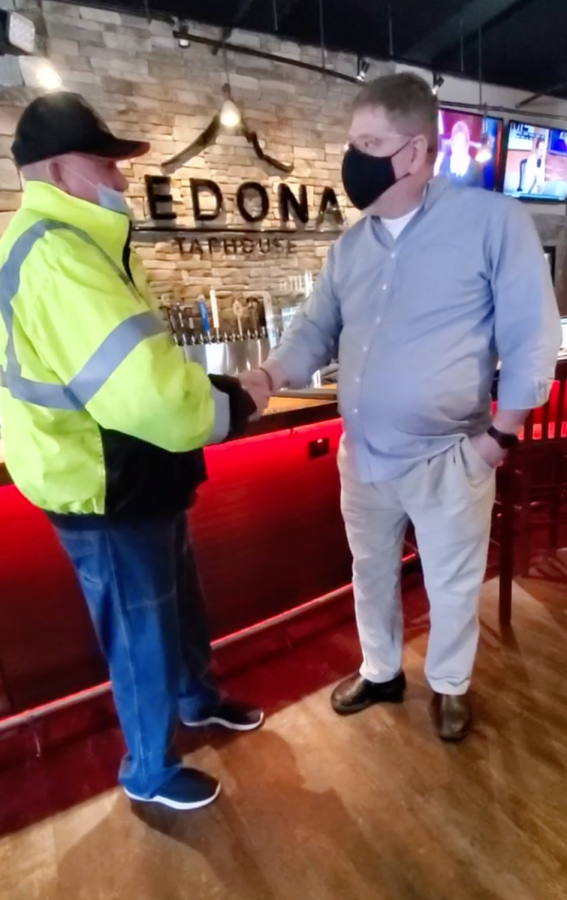 The head of the Fuller Center, Jim Killoran, shakes hands with the manager of Sedona Taphouse, Bill Jablonski.

On September 1st, 2021, Tropical Storm Ida brought record rainfalls as it made its way up the East Coast, leaving disaster in its wake. In the aftermath of Ida, local businesses and people’s homes remained damaged from the high floodwaters. When it came to efforts to restore and rebuild these homes and get businesses back up and running again, The Fuller Center for Housing of Greater New York City, a local organization, was at the forefront.
Volunteers from all over Larchmont and Mamaroneck eagerly joined the Fuller Center in their efforts, including many students from Mamaroneck High School. The Fuller Center Club at Mamaroneck High saw an increase in membership this year, and Francis Conway, a president of the club, says that this is in due in large part to Ida. He and the other presidents of the club, James Weiland, James Kohler, and Felix Zehe, are now leading sixty-one members. When asked about the work the club is currently doing, Conway said that they are mostly back to doing what they were before Ida, such as running the Fuller Center Reuse store. However, he says that they are still working on some of the homes that sustained serious damage during the flood.
Jim Killoran, head of the Fuller Center, is adamant that, although Ida hit Mamaroneck five months ago now, there is still plenty of work to be done. “To this day people still aren’t fully whole in their homes. And we’re still here,” he says. “We put a hot water heater in an Ida home, the guy’s 97 years old, he doesn’t have the money,” he continues. Since September, he says, “We’ve saved hundreds of thousands of dollars for families.” In addition to saving families money, they have dug up 1,300 pieces of sheetrock, given free insulation to those who need it, and , in the immediate aftermath of the flood, pumped water out of homes for free. This all has to do with their mission to partner with local businesses to restore and build houses for those in need in the New York Metropolitan Area. Millard Fuller and his wife Linda Fuller set this mission when they founded the Fuller Center for Housing in 2005.
One Mamaroneck business has proved to be an ideal partner. Sedona Taphouse is a local restaurant on Boston Post Road known for their Southwest-inspired cuisine, and more specifically, their steaks. Every Monday night since its opening in 2016, Sedona has sold its steaks at half price, with one to two dollars from every steak going to a select charity every month. The Dine Out for Charity on Monday Nights program was created as a way to give back to the community. “When you give to the community, the community always gives back to you,” explains Bill Jablonski, one of the restaurant’s owners. And so he put his plan into motion. He started reaching out to charities, and although Jablonski’s idea was well-intentioned, many charitable groups originally shot him down. “I had a hard time getting it started,” he says. “Jim was probably one of the first charities I reached out to that actually said ‘Hey that sounds like a great idea.’’ Since then, the program has only grown. Jablonski has been approached by charities from all over, months in advance. The number of charities interested in getting involved in Dine Out for Charity Mondays has increased so much that Jablonski says he must “plan my charities a year out now. So Jim is smart and as soon as his month is done, he starts texting me and says when are we doing the next charity. And then he looks at the calendar and finds [a month] that has five Mondays.” This January happens to have five Mondays, and Killoran has it booked. The Fuller Center for Housing of Greater New York City is the lucky benefactor of this January’s Dine Out for Charity program. Killoran says that the Fuller Center always looks forward to the event. “It’s very valuable to us. And our relationship with Bill and this restaurant, I value it highly. Because it’s a community connector in a community we are helping so much now,” he says. It gives him and his colleagues an opportunity to talk to people in the community about their work, and to recruit volunteers.
The program also proves to be profitable for the charity and Sedona. To put this into perspective, Jablonski says, “Monday is right now my third busiest day of the week, while most restaurants are closed.” Some of the restaurants’ regulars eat out at Sedona every Monday night without fail, and plenty of other customers go out to support the cause. Killoran even jokes that sometimes people don’t like charity and still show up because the food is good. “The food is great, people love the discount, so it’s a great buy for anyone to save money on a Monday night,” he says.
Overall, the partnership benefits both Sedona and the Fuller Center. It allows Sedona the opportunity to both give back to the community and bring in new customers, and it allows the Fuller Center to rally support and raise awareness for its cause.