The best skiers of MHS take on the slopes as they are back in action. 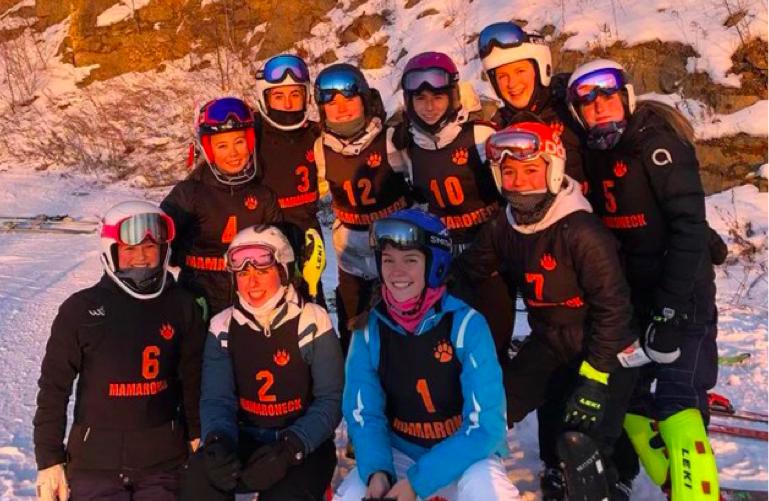 The Varsity Ski team smiles at Thunder Ridge Ski Area as they enjoy another great day of skiing.

The Mamaroneck ski team is ambitious, competitive, and driven. When members of the group signed up, the difficulties ahead were unknown. However, they have still been able to persevere through the toughest challenges. While skiing is one of many MHS activities, it differs greatly from other sports at the high school due to traveling needs. The team goes to many different mountains across New York and Connecticut, including their favorites, Mohawk and Catamount Mountains. They are able to go skiing once or twice a week during January and early February.

There are three upcoming races to look forward to, all taking place at Thunder Ridge. According to Captain Evan Epstein (‘22), this year the team is “hoping to have a couple of the boys make sectionals.” The team has a very successful record, having taken the New York State Skiing Championship only two years ago

Since COVID hit, members have had to get used to the required changes. Captain Marissa Lazarus (‘22) says, “COVID has definitely affected this year because we have not made it to the mountain as much as normal, as well as we do a lot more outside.” On top of that, the team is currently without a coach due to the virus. With a rise in COVID cases during the past month, quarantines have been a frequent difficulty for the ski team. A one-week quarantine may not seem like a big issue, but it has severely limited their ability to hit the slopes this season.

In addition, due to the required travel to get to the mountains and lack of space on the bus, there is less room for the JV skiers, ultimately leading to fewer spots on the team. Captain Caroline Prevost (‘22) addressed her concerns. “This year is similar to last year in that we have to practice outside a lot and have minimal resources. It’s also tricky when people on our team catch COVID and miss a week of practice. Because of COVID, our season has become more conditioning and less skiing.”

Although the pandemic has forced the team to face adversities, the ski team continues to practice and make the most of the experience. There have even been some benefits as a result of the changes! Henry Roffman (‘22) states, “I’d say training has maybe become more fun. Because of COVID-19 we are forced to communicate a lot more, so you get to know the people on your team better.” Prevost also mentioned that COVID has not interfered with the joy of being a part of this team. The only option the ski team had was to adapt. So they did just that.