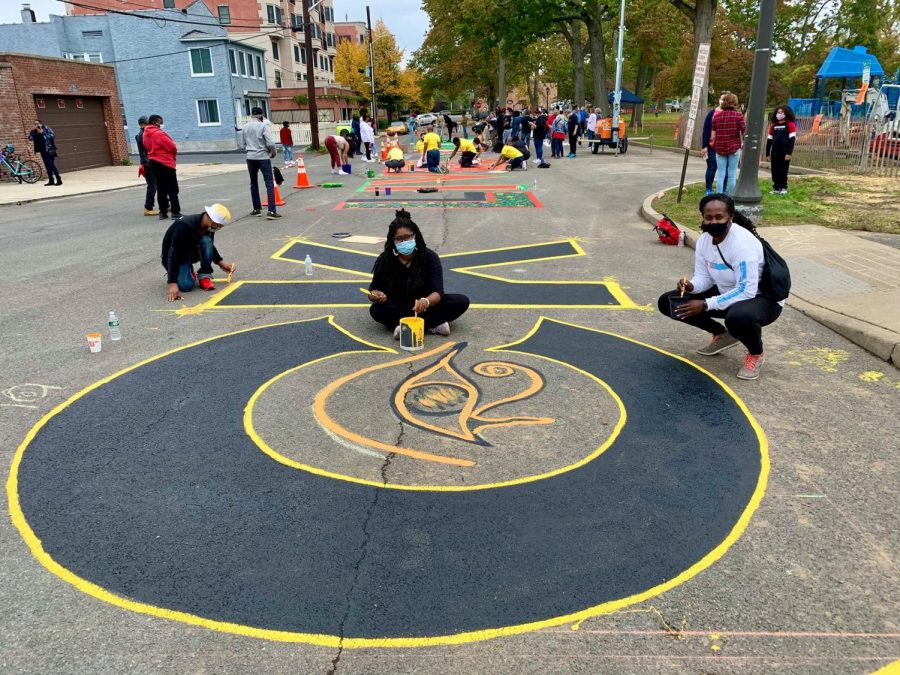 On September 29, 2020, the Village of Mamaroneck Board of Trustees approved a Black Lives Matter mural to be painted in the Washingtonville neighborhood, about half a mile away from downtown Mamaroneck. This landmark will speak to the commitment of our community to fight racism, inspire people of all ages, and demonstrate that hate has no home in Mamaroneck. However, this triumph was not achieved easily.

How did the idea for this mural develop? Lavet Allen, a Mamaroneck resident, has organized a block party in the Washingtonville neighborhood, at the end of each summer, for about 15 years. Not merely a summer tradition, this block party provides grants and school supplies for kids in the community each year. However, due to COVID-19 safety concerns, the block party was canceled this year. After the rise in BLM murals in towns across the country and Westchester county after the Black Lives Matter protests of the summer, a Mamaroneck BLM mural seemed like the perfect replacement for this beloved community tradition. It was a way for the community to come together and create something meaningful that declares, in no uncertain terms, that Black lives matter. Jarrett Winchester, 47, one of the lead organizers for the mural and group spokesman, said, “It’s an affirmation that Black Lives Matter. I think it represents to the black and brown community the acknowledgement of the problem in this country.”

The original proposal was for the 372-foot mural to be painted on Madison Street, between Grand Street and Old White Plains Road, in the heart of Washingtonville. Around 50 community members would have used private funds to paint the outdoor mural on September 26, 2020. This would not have hurt the health or budget of the Mamaroneck community; rather, it would have provided a worthwhile and safe alternative to a valued neighborhood tradition given the COVID-19 situation. “I think the message is a positive one and one of learning. It will make the young people more focused on and more sensitive to the plight of minorities in America,” Winchester said.

In spite of the need for and value of the mural, on September 21, the Village of Mamaroneck Board of Trustees rejected the proposal in a 3-2 vote. Trustees Nora Lucas, Daniel Natchez, and Victor Tafur voted no, while Mayor Tom Murphy and Trustee Kelly Wenstrup voted yes. Many residents attended the board meeting via Zoom to oppose the mural, saying it would cause division and controversy; others were concerned about the traffic it would bring to a mostly residential neighborhood. The trustees who voted in opposition to the proposal justified it with concerns of misinterpretation and confusion between the belief and organization. They also classified the mural and message as a political statement and worried that they would have to allow similar projects in the future. Only a few residents showed up in support of the mural, including Winchester and Allen. When asked about the significant opposition to the proposal from residents, Winchester said, “We live in a time where there will be opposition to any idea brought forth.”

Of course, this was not the end of the Mamaroneck BLM mural. On September 29, due to pressure from Mamaroneck residents, community members, organizations such as OneMamaroneck, and activists, the Board of Trustees held another meeting via Zoom to vote on a new proposal for the mural. Thanks to input from community members and collaboration with village officials refining the proposal, it passed unanimously. Mayor Tom Murphy, a strong supporter of both proposals, said, “Hopefully, it is the beginning of a process of understanding and recognizing systemic racism. The first step in recovery is admitting you have a problem.” Winchester said he hopes to involve the entire village in painting this mural. The mural will be painted near Columbus Park or on Madison Street on a date yet to be decided.

One key difference between the two meetings was the level of vocal support from community members and Mamaroneck residents. During the second meeting, dozens of residents tuned into the meeting to express their enthusiastic support for the proposal. They used examples of blatant racism in Mamaroneck to prove the importance of declaring support for Black lives. On the outpouring of support during the second meeting, Winchester said, “If you are going to undertake any cause, always remember, having numbers there to support you is important.” He quoted a line from Frederick Douglass’s 1857 “If there is no struggle, there is no progress” speech: “Power concedes nothing without a demand,” he said, adding, “if it thinks that it comes from a constituency without extreme fortitude.”

Winchester expressed his hope for the future, saying, “I believe our change will come with the younger generations as they are more empathetic of those who might not look like them.” He also gave some invaluable advice for all, but for young people in particular. “The more empathetic you are to the marginalized, the better our village, county, and country will be for it. Help causes other than your own. Gather numbers of support. Solidarity with others is important. Don’t be afraid to get your message out to the world. Remember, empathy alone is not enough. Getting active helps all causes. As Congressman John Lewis said, ‘Get in trouble, good trouble’.”