How the sport has been changed and how Gent Malushaga and Jason Markopoulos continue to excel at it. 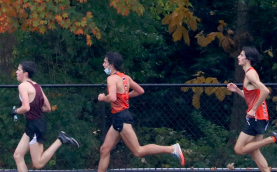 On a bitter ten degree afternoon last November, the Mamaroneck Boys’ Cross Country team placed second at the sectional races, setting a record with the best team score in Mamaroneck High School Cross Country history. After last year’s high placement, the team was projected to be the best in the section this year and had a solid chance of winning at states. However, due to the pandemic, all sectional and championship competitions of this year have been cancelled. Additionally, the social benefits of the sport are also suffering due to the current circumstances.

“When the run goes off, it’s madness,” states Gent Malushaga (‘21), a four-year member of the varsity team, in reference to cross country meets in previous years. “At an invitational meet, you could have 30 or 40 different teams with anywhere from 25 to 40 runners on each team. There’s usually a big open space where every team finds a spot to set up their tent and that’s where the athletes will hang out when they’re not warming up, racing, or cooling down. In a race itself, there could be up to 200 runners packed on the line shoulder to shoulder.”

This commotion can be starkly contrasted with the masked, sanitized, and socially distanced dual meets that are currently being held. During these meets only two teams compete as opposed to 40, and only seven runners compete in each race, as opposed to 200. According to Jason Markopoulos (‘22), a two-year runner for the cross country team, these factors have had a negative effect on the social aspect of the team. Markopoulos states, “Wearing masks and social distancing has definitely had a negative effect on the ability to socialize. It’s made us a little uneasy branching out to kids we don’t necessarily know that well.” In addition to the previously mentioned factors, Jason also states that the social aspect of the team is negatively affected by having to cut members for the first time. In any other year, there are more than 100 athletes running. This year, there are only twenty on each team.

The changing social and competitive aspects have led many team members to question whether the season should have been postponed to the spring, when there may have been a chance of a more ordinary season.

“It’s definitely a bittersweet feeling,” states Malushaga. Malashuga will be graduating in June, making it his last year on track. “On one hand, now that most of our championships meets have been cancelled, it kind of feels like the last three years of trying to build an elite program were for nothing – winning sectionals and potentially states with this group of guys would’ve been the perfect end to my high school career.”

Nevertheless, Malushaga, Markopoulos, and the cross country team as a whole are trying to make the most of the season. Markopoulos acknowledges, “Everyone has to deal with it, so I don’t see a point in feeling sorry for ourselves. We work hard, with or without a season.”